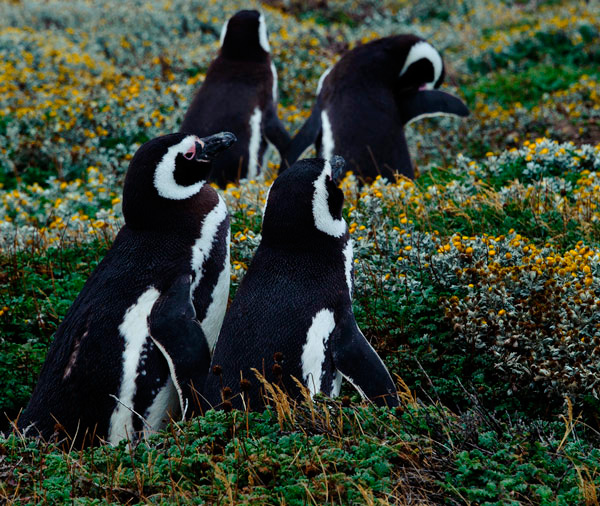 Click on the penguins to see the gallery.
Have you ever been to the end of the Americas?– check out Punta Arenas Chile.
Punta Arenas Chile is located in Northern Patagonia, it is the Southernmost city in the World, and a very interesting city to visit on the way to Antarctica. Magellan penguins can also be seen nearby in Otway Sound.
The penguins are native to the Strait of Magellan in the cool climate of southern Chile, and each spring hundreds of Magellanic Penguins come home to their birth place to breed. Nests are built in earthen burrows and usually two eggs are laid. Incubation lasts 39–42 days, a task which the parents share in 10-15 day shifts. The chicks are cared for by both parents for 29 days and are fed every two to three days. Normally, both are raised through adulthood, though occasionally only one chick is raised.

Magellanic Penguins mate with the same partner year after year. The male reclaims his burrow from the previous year and waits to reconnect with his female partner. The females are able to recognize their mates through their call alone. They are able to make quite a racket when they want to!

Millions of these penguins still live on the coasts of Argentina and Chile, but the species is classified as a “threatened species”, primarily due to the vulnerability of large breeding colonies to oil spills, which kill 20,000 adults and 22,000 juveniles every year off the coast of Argentina. (Wikipedia)