A bird that I photographed in Abu Dhabi that I think is a jackdaw (Corvus monedula) is a lively, diminutive member of the crow family (5). It appears to have totally dark plumage from a distance, but on closer inspection it can be seen that it is dark grey in colour with a lighter grey nape and sides of the neck (2). The beak is short and slender, the eyes are a unique pale blue, and it walks with a quick ‘jaunty’ step (6), all of which allow this bird to be distinguished from the carrion and hooded crows or the rook (2). Males, females and juveniles are similar in appearance (2). The name ‘daw’ for this bird has been used since the 15th century; it is probably imitative of the call (7), but also means ‘simpleton’ (6). ‘Jack’ is often used for small animals, and, like knave, means rogue, yet it may also be derived from another call, ‘tchack’ (6). This bird is indeed smaller than both the rook and the carrion crow, and is a renowned thief (7). 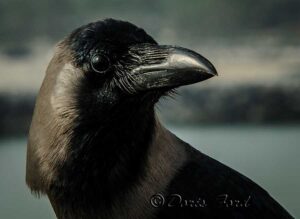 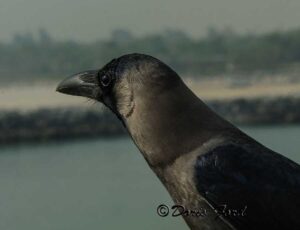