Round Barn in Kansas 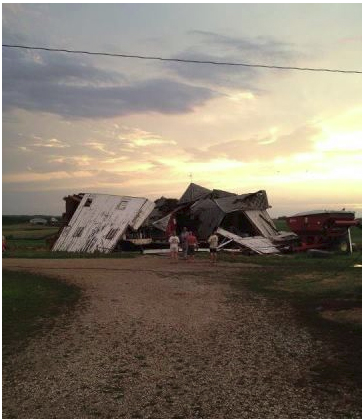 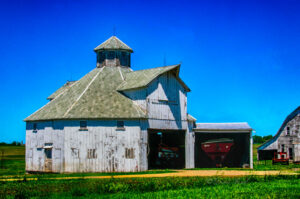 In 1999 James R. Shortridge wrote in his “Round Barns of Kansas” that there were 24 Round Barns in Kansas, presumably there are now only 23.
The CURRENT OWNER is Mark Burke who bought it about 10 years ago from Orlin Strum. There was on article in the local (Atchison, Kansas) paper (http://atchisonglobeonline.com/) about Mark moving hay and equipment that was in the barn.

“DONIPHAN COUNTY—JOHN FUHRKEN BARN
SITE: NW quarter, Sec. 27, T4S, R19E; three and a half miles south of Denton, then a half mile west on Highway 20.
TYPE AND SIZE: octagonal without silo; 58-foot diameter.
DATES AND STATUS: built about 1914–1915; in good condition in 1999 although the main entry has been enlarged and the interior gutted for hay storage.

Fuhrken built his barn primarily to stable mules. It originally contained five double stalls, a single stall, two
granaries, a harness room, and a full loft. Two large hay doors project through the roof on opposite sides.
The roof is segmented and single-pitched and is supported by interior posts and braces. The walls—vertical
boards with battens—contain many small windows. Two gabled machine-shed additions extend to the northeast and northwest.

Whether during the heyday of their construction in the 1910s or
now, round barns have always attracted public attention. Editors
and readers of farm magazines once engaged in spirited
debate over the advantages that this new shape might offer for housing
animals and for storing feed and equipment. More recently the appeal has
been based largely on scarcity and aesthetics. Fewer than fourteen hundred
round barns have ever existed in the United States, most of them in
Illinois, Indiana, Iowa, and Wisconsin. Kansas is on the fringe of this concentration.
A local survey begun in the 1980s has located forty-one such
barns built over the years for and by Kansas farmers and stockmen. Of
these, a mere twenty-four still remain on the landscape.”

The above information was taken from a publication entitled The Round Barns of Kansas by: James R. Shortridge

James R. Shortridge is a professor of geography at the University of Kansas, where he received his M.A. and
Ph.D. degrees. His recent publications include Peopling the Plains: Who Settled Where in Frontier Kansas (1995) and The Taste of American Place: A Reader on Regional and Ethnic Foods (1998). His active research in material culture led to his interest in and study of Kansas barns. 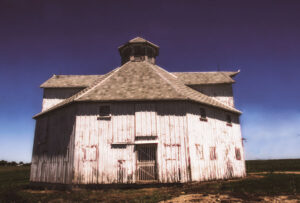 The Round Barn with a Photoshop “antique” look.
All photos of the barn before destruction taken in a 2011 Photoshoot by Doris Ford. 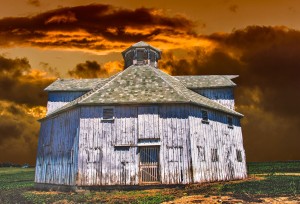 A Photoshop rendering of the storm that would destroy this Historic Round Barn little more than a year after after the picture was taken.