Georgetown is the capital of Grand Cayman, the largest of the Cayman Islands, and known for its spectacular diving and snorkeling. The area is also know for exceptional clarity and color of the sea due to the fact that there are no natural rivers or freshwater draining into the ocean around the sea. We made a stop there on the way to the Panama Canal before heading down the West coast of South America. We did two one tank dives, and enjoyed our time in the water. Attached are some photos from under and over the water! Not the best underwater pictures, but perhaps you can get an idea of some of the beautiful fish and coral that takes me underwater every chance I get.
Click on the Welcome photo to see the gallery. 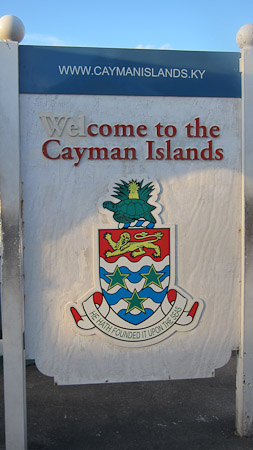 In 2004 over 80% of the buildings were either damaged or destroyed by Hurricane Ivan- the worst to hit the island in 86 years. However, because tourism accounts for the majority of the island’s economy, most business were quick to repair and re-open. Georgetown is home to to the Cayman’s financial industry and the town boasts over 600 banks! Points of interest for visitors include the turtle farm, and Stingray City, but the relaxed atmosphere and beautiful waters give Grand Cayman special allure.