A visit to Kyrgyzstan Featuring Horse Games,Crafts and Monuments

The Kyrgyz people are descended from nomads and are proud of their horsemanship. While we were there we got to experience display of traditional Kyrgyz horse games, including Oodarysh, a kind of wresting match on horseback and Ulak Tartysh a sort of polo played with a goat carcass. Photos of each are featured. 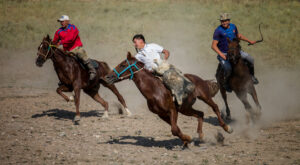 Horsing around in Kyrgyzstan Riding towards the Goal 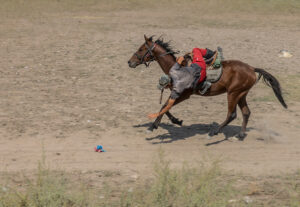 Reaching for the prize

Arts and crafts of Kyrgyz people has evolved over the centuries. It was formed based on the needs of people’s everyday life, and the nomadic way of life influenced their Customns. Among the major forms of arts and crafts felt art, weaving, patterned embroidery, making of mat, leather products, jewelry, and wood carving.

The art of making felt products is closely related to the dwelling of the nomads, the yurt. Carpets of felt, decorated with ornaments, are called “shyrdaks”. Shyrdak is a very important element in the decoration of a yurt. It is usually located on the floor. Felts for shyrdaks are made ​​from sheep wool, which is tightly rolled and painted in bright colors. Felt is made from pieces of ornament, then they are sewn together to form a beautiful carpet. Shyrdak’s length is usually four meters. width is about two meters. The great meaning in the applied arts has the carpet “ala kiyiz” (kyrg. “motley felt”). It differs from shyrdak that felt pieces are not sewn, but they are rolled to each other.

We purchased a traditional men’s hats, or kalpak in a typical felt design. 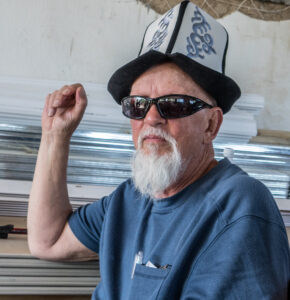 Model of the typical Kyrygzstan Hat

Embroidery also can be noted as significant craft of Kyrgyz people. Often only women involved in it. They skillfully embroider patterns and ornaments on fabrics, leather and felt. Kyrgyz masters magnificently embroider wall pictures “tush-kiyiz”. Such pictures’ center is usually plain, without patterns, while the sides are framed by the wonderful color ornaments. Pattern embroidery is also common for traditional bags “ayak-kap” and hanging shelves “tekche”. 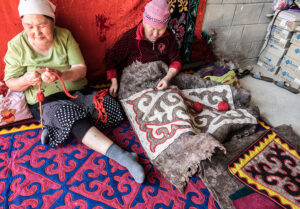