These are a few sample pictures from our travels in 2017. These are a selection of pictures taken in Greenland, Iceland, Italy, Greece, Wales, Scotland and England. Please check back for Photographic additions in one or all of the visited Countries.

Greenland is an interesting country ans has just recently started receiving the tourist trade. I bought a fun t-shirt in Greenland on our first visit that says “Lost in Greenland” such fun!

Venice is great for photography; the Gondolas, the canals, Rialto Bridge and the historic Buildings. Burano Italy is just a water taxi away from Venice famous for its colorful houses, and beautiful lace work. Santorini and Mykonis are beautiful Greek Islands, and very popular with the tourist crowd. Many Chinese women come to Santorini to pose in their wedding gowns.

Wales, Ireland and the Islands off Scotland have many interesting Neolithic sites such as Skara Brae and several Henge sites, Standing Stones of Stennes, and Ring of Bodgar near Kirkwell Orkney. 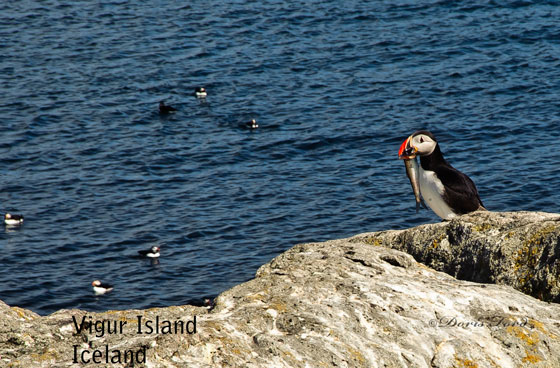 Vigur Island— A birdwatchers paradise, the pearl of the Westfjords are  words that can and have been used to describe this small island in the far northwest of Iceland.

It is the second largest island of the Isafjordur Bay or the Djup. It is about 2 km long and 400 m wide sits in the ocean and is surrounded by fjords. One family lives on the island all year. Their livelihood is based on farming, the collection of eggs and eiderdown, bird catch and tourism. The island is home to about 80,000 Atlantic puffins, a large number of eider ducks, arctic terns, guillemots and many other types of birds can be found on the island. Most of the houses are from late 19th century or early 20th. Seals often can be seen on the shore line as well as whales and dolphins further out in the sea.

The only surviving windmill in Iceland is situated in Vigur, owned by the National Museum of Iceland but maintained at the island. It was mainly used to grain corn. 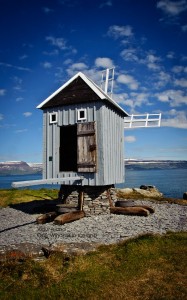 Eider Ducks furnish the eiderdown for the famous pillows and quilts, and a living for the farmer. The ducks are wild, but develop a symbiotic relationship with the farmer and don’t seem to mind when he collects the down. He also builds shelters for them to use for their nests, and feeds the ducklings.

On the thirty minute boat trip from Isafjordur to Vigur Island there were many puffins flying and many more in the water all around us. Iceland is the breeding home of perhaps 60 percent of the world’s Atlantic Puffins. Parts of Vigur Island is covered with Puffin nests which are burrows in the ground. 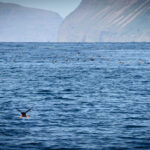 A different kind of Puffin not found on Vigur Island: 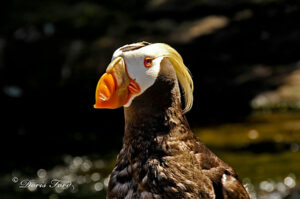 The Tufted or Horned Puffin is mainly found in the North Pacific and looks similar to the Atlantic Puffin, with the addition of the head ornaments.