These are a few sample pictures from our travels in 2017. These are a selection of pictures taken in Greenland, Iceland, Italy, Greece, Wales, Scotland and England. Please check back for Photographic additions in one or all of the visited Countries.

Greenland is an interesting country ans has just recently started receiving the tourist trade. I bought a fun t-shirt in Greenland on our first visit that says “Lost in Greenland” such fun!

Venice is great for photography; the Gondolas, the canals, Rialto Bridge and the historic Buildings. Burano Italy is just a water taxi away from Venice famous for its colorful houses, and beautiful lace work. Santorini and Mykonis are beautiful Greek Islands, and very popular with the tourist crowd. Many Chinese women come to Santorini to pose in their wedding gowns.

Wales, Ireland and the Islands off Scotland have many interesting Neolithic sites such as Skara Brae and several Henge sites, Standing Stones of Stennes, and Ring of Bodgar near Kirkwell Orkney.

This bridge was built between 1588 and 1591 to span the Grand Canal and remained the only way to cross the canal by foot until 1854 with the addition of the Academia Bridge! The Rialta Bridge has three walkways one of which was designed to allow passage of galleys.
It is especially pretty at Sunset

A recent picture of my hubby just before we took a Gondola ride in Venice! Many more pictures to follow so stay tuned! 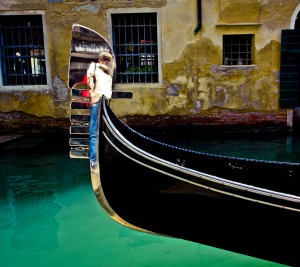 Venice (Italian: Venezia [veˈnɛttsja] is a city in northern Italy known both for tourism and for industry, and is the capital of the region Veneto.

The name is derived from the ancient people of Veneti that inhabited the region as of 10th century B.C. The city historically was the capital of the Venetian Republic. Venice has been known as the “La Dominante”, “Serenissima”, “Queen of the Adriatic”, “City of Water”, “City of Masks”, “City of Bridges”, “The Floating City”, and “City of Canals”. Luigi Barzini, writing in The New York Times, described it as “undoubtedly the most beautiful city built by man”. Venice has also been described by the Times Online as being one of Europe’s most romantic cities.

The city stretches across 117 small islands in the marshy Venetian Lagoon along the Adriatic Sea in northeast Italy. The saltwater lagoon stretches along the shoreline between the mouths of the Po (south) and the Piave (north) Rivers. The population estimate of 272,000 inhabitants includes the population of the whole Comune of Venezia; around 60,000 in the historic city of Venice (Centro storico); 176,000 in Terraferma (the Mainland), mostly in the large frazioni of Mestre and Marghera; and 31,000 live on other islands in the lagoon. There is a recent concern that Venice will be come a living museum with no Venetians living in Venice, just tourists!

The Republic of Venice was a major maritime power during the Middle Ages and Renaissance, and a staging area for the Crusades and the Battle of Lepanto, as well as a very important center of commerce (especially silk, grain and spice trade) and art in the 13th century up to the end of the 17th century. This made Venice a wealthy city throughout most of its history.[6] It is also known for its several important artistic movements, especially the Renaissance period. Venice has played an important role in the history of symphonic and operatic music, and it is the birthplace of Antonio Vivaldi, and the place that Richard Wagner died.

A fun city–Visit it soon!