The next time you visit Scotland take a trip on the Falkirk Wheel, and view Archimedes principle of displacement in action! On our Narrow boat Canal trip we went through the Wheel several times, here are some photos of our experience. 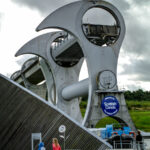 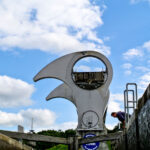 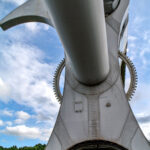 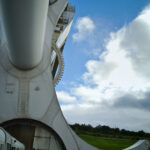 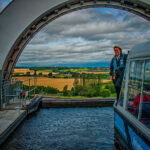 Looking down on the countryside from the top of the wheel. 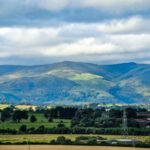 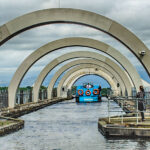 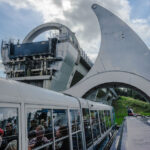 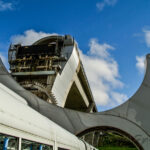 History
The Millennium Link was an ambitious £84.5m project with the objective of restoring navigability across Scotland on the historic Forth & Clyde and Union Canals, providing a corridor of regenerative activity through central Scotland.
A major challenge faced, was to link the Forth and Clyde Canal, which lay 35m (115ft) below the level of the Union Canal. Historically, the two canals had been joined at Falkirk by a flight of 11 locks that stepped down across a distance of 1.5km, but these were dismantled in 1933, breaking the link.
What was required was a method of connecting these two canals by way of a boat lift. British Waterways (now Scottish Canals) were keen to present a visionary solution taking full advantage of the opportunity to create a truly spectacular and fitting structure that would suitably commemorate the Millennium and act as an iconic symbol for years to come.
The resultant, a perfectly balanced structure that is The Falkirk Wheel – the world’s first and only rotating boat lift – was the eventual outcome of our collaboration with a design team that combined international experience of joint venture contractor Morrison-Bachy-Soletanche with leading specialists from Ove Arup Consultants, Butterley Engineering and Scotland-based RMJM architects.
Completion of The Millennium Link project was officially marked by Her Majesty The Queen on 24 May 2002 at The Falkirk Wheel.
How does it work?
The Falkirk Wheel lies at the end of a reinforced concrete aqueduct that connects, via the Roughcastle tunnel and a double staircase lock, to the Union Canal. Boats entering the Wheel’s upper gondola are lowered, along with the water that they float in, to the basin below. At the same time, an equal weight rises up, lifted in the other gondola.
This works on the Archimedes principle of displacement. That is, the mass of the boat sailing into the gondola will displace an exactly proportional volume of water so that the final combination of ‘boat plus water’ balances the original total mass.
Each gondola runs on small wheels that fit into a single curved rail fixed on the inner edge of the opening on each arm. In theory, this should be sufficient to ensure that they always remain horizontal, but any friction or sudden movement could cause the gondola to stick or tilt. To ensure that this could never happen and that the water and boats always remain perfectly level throughout the whole cycle, a series of linked cogs acts as a back up.
Hidden at each end, behind the arm nearest the aqueduct, are two 8m diameter cogs to which one end of each gondola is attached. A third, exactly equivalent sized cog is in the centre, attached to the main fixed upright. Two smaller cogs are fitted in the spaces between, with each cog having teeth that fit into the adjacent cog and push against each other, turning around the one fixed central one. The two gondolas, being attached to the outer cogs, will therefore turn at precisely the same speed, but in the opposite direction to the Wheel.
Given the precise balancing of the gondolas and this simple but clever system of cogs, a very small amount of energy is actually then required to turn the Wheel. In fact, it is a group of ten hydraulic motors located within the central spine that provide the small amount, just 1.5kw, of electricity to turn it. 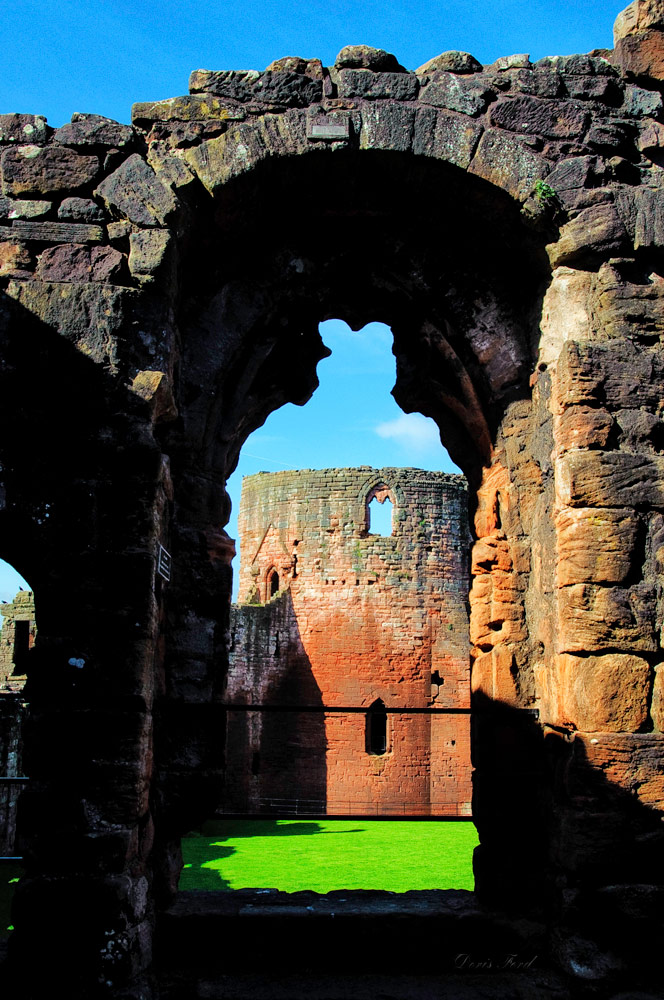 This part of the interior of Brothwell Castle.
See the rest of the Gallery in the Travels section.